I’ve been spending a week in Scotland for the MAPT conference. Some people manage to do live blogging of such things. I didn't. (To be fair, they told us in advance that there wouldn’t be a wireless connection available at the conference, so to cut down on the weight I'd be carrying to and from I didn’t bring my computer with me during the days, and have been too busy in the evenings visiting with an old friend with whom I am staying. So I’ll try to post highlights from the conference over the next few posts. 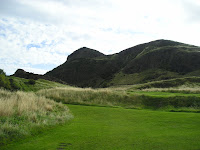 The conference started with a local field trip. We went first to Hollyrood Park, which is in the middle of the city. The most prominent feature of this park is Arthur’s Seat, which is the core of an extinct volcano, which erupted about 350 million years ago. Ten distinct lava flows (olivine +/- other minerals basalt) are distinguished in this area. Apparently there has not yet been a systematic flow-by-flow detailed comparison of the various compositions, if any students out there are interested in the subtle changes that a volcano undergoes during its eruptive cycle. 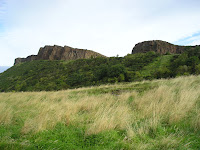 The second most prominent feature of the park is the sill which makes up Sailsbury crags. James Hutton, (a local man who is known as the father of geology) found an important contact here which helped to settle the debate between the “Neptunists” and the “Plutonists”. The former believed that crystalline rocks formed by precipitating out of sea water, while the latter believed that they had cooled from a molten source. 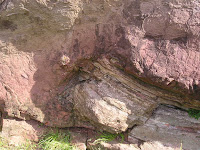 This outcrop showed that the crystalline rock had intruded into sedimentary layers and in the process, lifted up a layer of sandstone and oozed a short distance underneath that layer. This would not have been possible had it precipitated out of a liquid. Additional proof was provided by his friend, Sir James Hall, the father of experimental geology. Hall owned a foundry, so had access to the appropriate equipment to try melting rock. His experiments proved that one could melt basalt, cool it, and obtain a rock which looked much the same as the starting product. Therefore, the original must also have cooled from a molten source. 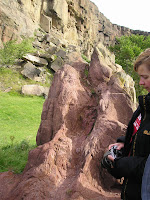 Another noteworthy feature of the park is the world’s first example of geological conservation. Hutton observed this hydrothermal vein cutting through the sill, altering the minerals and depositing hematite (iron ore). At the time this area was being actively quarried, and he requested that the quarrymen leave this particular part of the outcrop intact for future generations to observe the phenomena, and they did. The cliff wall is now quite a way behind the preserved portion of the outcrop. 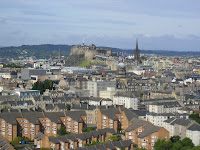 Views from the park include Edinburgh’s castle, which sits upon another volcanic plug.

Stay tuned for my next post, when the field trip moves about 40 miles south to Siccard Point, the site of Hutton’s most famous unconformity.

So you're one of the people currently causing congestion in the corridor outside my office...

I'm very impressed that you found some sunshine as well as Hutton's contact!