It has been a while since I made time to play in the Accretionary Wedge. This month the topic asks us to share (a) geologically significant photo(s). This announcement reminded me that I never did type up a summary of the field trip I did last year after the MAPT conference, so I’ll share a couple of photos from that trip, and explain why they are important.

The field trip went to look at the area Barrow made famous when he used it to formulate his theories on metamorphic facies. The Dalradian series is located just north of the Highland Boundary Fault in Scotland. Different parts of the series were metamorphosed at different pressures/temperatures, which resulted in different combinations of minerals in each area, though the composition of the rocks is similar.

In our field trip we started out near the fault, and stopped in each of the key areas along the way, visiting outcrops of the chlorite zone, the biotite zone, the carnet zone, and the kyanite zone. Most of the geologists on the trip are accustomed to looking at rocks in thin section, where, once you’ve learned how to identify them, it is a very easy matter to identify minerals and tell at a glance which zone the rocks come from. However, when Barrow did his field work in this area, he did it largely without thin sections—instead he looked at the rock outcrops themselves, and broke off pieces with his hammer and looked at them in the field.

The man was a talented enough petrologist that he was able to identify the minerals in the field, and to tell when he’d moved from one mineral assemblage to the next. Having spent a rainy day tramping around the lower part of the Scottish Highlands accompanied by geologists who knew in advance what minerals to expect in each outcrop, I still had difficulties spotting the index minerals in the outcrops. Or rather, I did, until we reached the kyanite zone. There is simply no mistaking the large blue crystals of kyanite in these rocks! 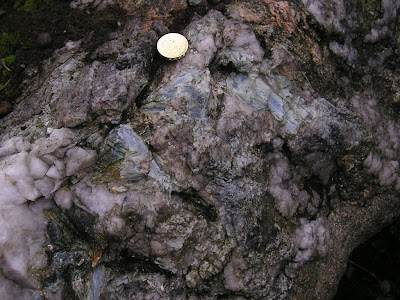 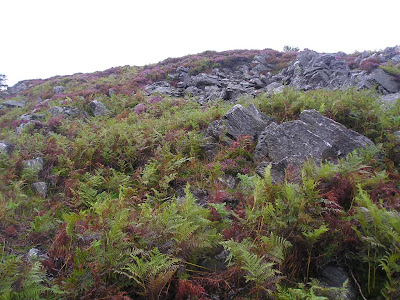