I think I have a new favourite rock type

I spent most of last week at the Metamorphic Geology Field Symposium in Halland, SW Sweden, and can enthusiastically say that this was the best field trip/short course/conference I have ever attended. The outcrops were stunning, the lectures fascinating, and the discussions engaging.  All in all I am very, very inspired to pursue research in metamorphic geology once again. The project I have been working on for the better part of the past two years is tangentially related to metamorphic petrology (the rocks have undergone metamorphism, but that is not terribly relevant to the project goals), and it has been interesting, but from here on out I would like to have my research even more closely aligned with my metamorphic interests. But that is not what I am here to talk to you about.
Kyanite eclogite!  There is a place in the south west corner of Sweden where there are lenses and layers of kyanite-bearing eclogite within a deformation zone. The zone is, specifically, the Gällared Zone, which, they tell me, is the northeastern most part of the Ullared Deformation zone as defined by Möller et al (1997).

Due to the deformation in this area some of the eclogite has been transformed into high temperature mylonitc gneiss, but there are still a number of areas where the eclogite itself has survived. Within these areas are veins where the kyanite is so abundant that instead of being a green-red normal eclogite the rock is a striking blue-red combination that is so beautiful I thought it worth taking the time to put my fingers to keyboard and do some bloging for the first time in months.
The field guide for the trip tells me that the presence of kyanite in rocks that have experienced eclogite facies metamorphism indicates that the pressures would have been greater than 15 kbar at a temperature of 700 C, and the paper by Möller (1998) contains a great deal more information about the composition of the various minerals in these rocks and what those compositions mean in terms of the temperature and pressure at which they formed. 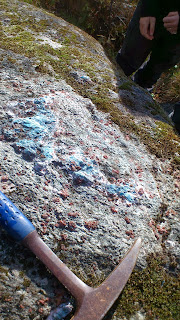 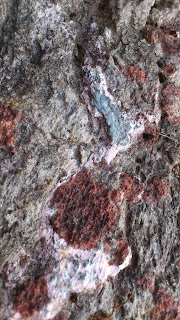 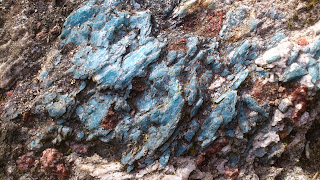 Posted by A Life Long Scholar at 08:00 No comments: