A cluster of monazite grains

Just to be different, here is one of the things I’ve been looking at for my research, if any of my readers understand enough of the below to give me their thoughts, I’d appreciate it. 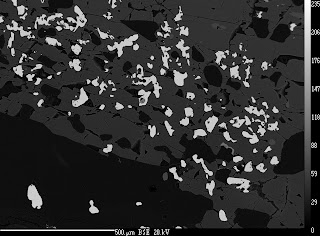 This BSE photo shows (part of) a large cluster of monazite grains included within a single garnet in a whiteschist. This sample has only one generation of monazite (metapelitic samples from the same region show two generations of monazite, the younger of which is the same age as the ones in this sample). The other garnets in this sample have few (or none at all) monazite inclusions. The monazites included within the other garnets of this sample show different levels of Y based upon where in the garnet they are located. The ones in the garnet cores (there is a circle of quartz inclusions at the core-rim boundary for these garnets) are low in Y (0.07 to 0.4 wt%), while the ones in the rims and in the matrix are higher in Y (0.99 to 2.7 wt%). However, this cluster, which is located within the core of its garnet, as defined by the circle of quartz inclusions (see below ppl photo of the garnet which hosts the cluster of mnz), has the same high levels of Y as seen in the monazite included within the rims of the other garnets. 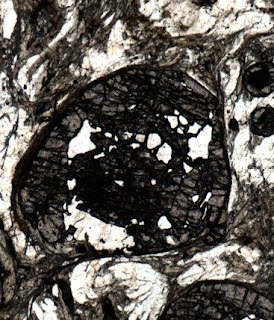 I've had some thoughts about this cluster and its implications for this sample, but I would welcome hearing what others have to say about it.

Could the garnet with the monazite inclusions in the core be a cut through the edge of a larger garnet?

I haven't worked with REEs in garnet - when I was in grad school, my research was mostly structure, and after that I didn't have regular access to a probe that could measure REEs precisely. That means that I haven't kept up with the work on REE partitioning and on in-situ monazite dating (other than trying to follow the results of the dating in my backyard). So I don't have any ideas about what kind of reactions might be going on. But sometimes an unusual garnet is a cut through the edge of a garnet. (What does the zoning in major elements look like? Is it what you would expect for an edge cut garnet?)

Also, whiteschists in Tasmania? Cool. (The only whiteschists I've heard much about are the high-pressure rocks from the Alps, and I don't remember what assemblages were common in them.)

It could be. I did the garnet analysis for this sample months before the monazite dating, and didn't happen to analyze this particular garnet. However, the ubiquitous circle of quartz inclusions is a reliable indicator of the core-rim boundary in other garnets in this sample, leading me to suspect that it truly is the core. Alas, I didn't get REE analyses for the garnets, only the monazite. It would be interesting to get them for the garnets and see if the one with the monazite cluster has a different pattern to the ones with few or now monazites.

Yup, the outcrop of Tasmanian whiteshist was discovered in the 1970's. Then they lost it--a variety of people, including my advisor, looked for it several times over a 20 year period, but sometimes were looking in the wrong area, and other times the river was too high to expose it. We finally found it on a trip last year. Tiny thing, just a couple of meters wide, surrounding a hollow. I can see how they missed it on other occasions, but this time we've got photos and GPS coordinates.