Annotating the figures in the articles I read is ever so helpful, if time consuming

Sometimes, simply reading the text of an article isn’t enough—sometimes it is truly necessary to look at the figures very closely in conjunction with the text to understand exactly what the text is saying about the figures. This is easy when the figure happens to be on the same page, and one’s eye can easily skip from one to the other, without losing one’s place. But, often, figures are located in drastically different parts of the document. With a photo-copy one can remove the staples, and set the two pages side by side (unless it is a two-sided copy and the one is on the back side of the other, of course), but many of us today prefer reading our articles in pdf on the computer screen, rather than wasting paper, particularly given the large number of articles it is needful to read both to stay on top of the current literature in one’s field, and to catch up on the “classic” papers in a field when expanding one’s research into a new direction.

The solution use to make it possible to see both the figure and the text at once is to use the “import” function of my drawing program to open the just the relevant page of the pdf and zoom in on the figure. Then I am able to display the drawing program and the pdf itself open side-by side on the screen at the same time (it is better yet when I have two monitors available!). However, for older articles the pdf often looks like a bad-photocopy (and, indeed, I suspect that in some cases the scan may well have been made from a bad photocopy rather than the original article) so zooming out far enough to see the whole figure at once often makes it difficult to see important details in the figures, but zooming in on details results in pixilation issues, which, again, can make it difficult to see.

This is where opening them in a drawing program can be very helpful, as it is possible to annotate the figure. 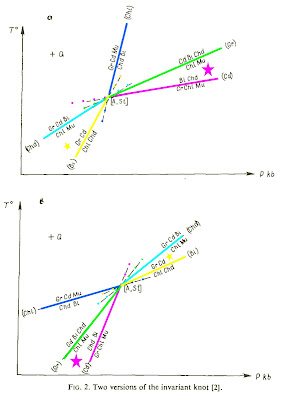 The figure above is figure 2 from Kepezhinskas and Khlestov (1977). The original was black and white, of course. The paper discuses Petrogenetic Grids and development thereof (as well as specifically presenting one they developed). In the course of their discussion on the development of such grids they describe an example of how it is possible to use observations of mineral assemblages in real rocks to select between two different theoretically possible arrangements of the lines on the grid. They say:

“For example, for the knot [2] including curves only with positive slopes two alternative versions are shown in Fig. 2. It may be easily seen that for the association Chd+Bt (+Q+Mu) and Cd+Gr+Chl+Mu(Q) the pressure intervals corresponding to their stability fields do not overlap one another. For the version 2a Bt+Chd characterize higher pressures, while Cd+Gr+Chl+Mu lower ones. For the version 2b one has the reverse.”

In my annotations I’ve marked the “Chd + Bt” field with a pink star in both diagrams, and the “Cd + Gr + Chl +Mu” field with a blue one. I’ve also colour-coded the various lines representing the mineral reactions so that it is easy to see how the two diagrams differ, and covered over the difficult to read text of the main labels with my own text (text added by the drawing program is clear and easy to read at any number of zoom levels, unlike the pdf of this document--alas, that layer didn't import into this post, though it shows on the jpg on my screen, so I've replaced the photo with one showing the original text). They go on to say:

"It is well known since Thompson's (1957) work that Gr+Cd+Chl+Mu is possible only at low pressures. On the other hand as reported in the literature, Chd+Bi occurs almost entirely in kyanite-sillimanite type complexes being confined frequently to especially high pressure rock series containing simultaneously glaucophane schists. It seems quite reasonable that the real thing is version 2a.

Simply reading the text, for me, does not create understanding. Combining the text with the colour-coded figure makes it easy for me to understand what they mean, and why they like 2a better than 2b. (Why, yes, I am visually-oriented with a need to “see for myself”; why do you ask?)

Email ThisBlogThis!Share to TwitterShare to FacebookShare to Pinterest
Labels: 1000 a day, annotating figures