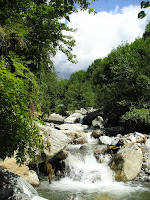 Last Friday, just before leaving work for the day, one of my colleagues mentioned to me that two of them would be heading on a field trip on Monday, and would I like to join them? For that sort of question there is only one answer possible.

He then provided me with this much advance information: I was to meet the other colleague at the train station on Monday to catch the 08:00 train to Como, where we will meet the first colleague, get in a car, and head to the field.

Once I arrived at the train station the purpose of the day’s journey was revealed; my colleagues were introducing a new graduate student to his field area. We first drove for about an hour along the western shore of the lake to Gravedona, where we stopped at a sore to pick up some stuff for lunch, and then went up hill from there, first to Dossa del Liro, then on to Caiaso. At our first stop we walked a short way up the gully and spent a pleasant 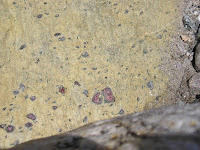 hour looking at the various metamorphic rocks which have been dropped there by the stream in its rush to the lake. The intent was to familiarize the student with the many lithologies which are present in his field area, and more specifically to introduce us to the peridotite (photo to the right--the large garnet is ~2 cm long) so that if we were fortunate enough to find it "in place" later, we'd recognize it. We had along a copy of a 1968 paper which documents the presence of peridotite from the valley in which we'd be hiking, but none of my colleagues were quite certain where in the valley we'd find it.

The hike itself was wonderful--it was a lovely day. Sure, it was 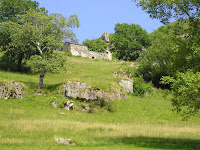 hot, but it has been hot every day since I arrive in Europe, so I'm started to adjust, and it was not quite as hot at that elevation (the sign at the trail head said 1000 meters) as it has been in down in the city. Driving up the hill to the trail head I kept seeing lovely old stone houses, and was delighted that there was one at the trail head, and quite a number of them along the trail. Some of the cottages have obviously been abandoned and are in poor repair, but one of the houses has a solar panel on the roof, which I consider to be a good indication that it is still in use today. 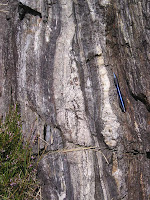 Walking up the valley we stopped now and then to admire various rock outcrops, such 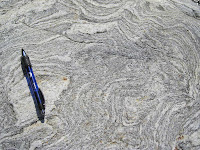 as this garnet migmatite (left), which is a metamorphic rock which went far enough down a subduction zone that the pressure/heat caused partial melting, or the intricate folds in this one (right). 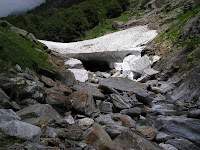 Late in the afternoon we’d hiked far enough up the valley to reach a good-sized patch of snow that has survived the summer heat. I suppose one could call it a glacier, as the snow obviously stays year-round, yet it clearly doesn't have sufficent mass to cause the metamorphic crystallization of the ice in the lower levels, nor to flow down hill. 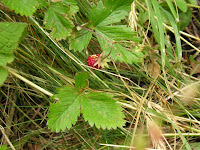 Just down hill from the snow-patch, I discovered some truly yummy wild strawberries, a true highlight of the day. I must confess that I ate most of them before remembering that I've a camera in my pocket, and it might be nice to record them for posterity. Fortunately, there was one remaining when I thought of it... 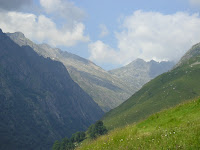 All in all it was a wonderful day, and I am so very glad I went. It was a joy to get out of the city, and to see some mountains! It was interesting listening to the various lectures on the rocks given the graduate student in the local language, as there are a number of geologic terms which are the same (or close enough to the same) in both languages, so I was able to understand more of those lectures than I did the random bits of other conversation that were scattered across the day. (Fortunately for me, both of my colleagues speak English and remembered to include me in conversations on a regular basis, but I do look forward to the language course they say I can take come September, I would like to be able to communicate a bit in the local language.)

Come visit, I've got crash space, and I know how to get there from here...