A tale of two Conferences

Like many scientists, I have a variety of interests, in some pretty diverse fields. The past two weeks were spent indulging two of them by attending two very different conferences.

The first conference, on Micro-Analysis, Processes, Time, was sponsored by the Mineralogical Society in the UK. Like many geological conferences, it began with a pre-conference field trip, the first stop of which I’ve already posted (and will be getting back to post about the other stops soon, now that I’m home). The conference itself had around 200 people attending (small compared to some!). The schedule was fairly typical for geology conferences, with talks running during the days (generally business hours), and people scattering to the four winds in the evenings. There were enough people presenting that Monday and Wednesday had four tracks of talks happening at once, meaning that one had to pick and choose amongst them, but, generally, things were arranged such that it is likely that if there is one talk in a session one is interested in, the others may well also appeal, meaning that I was able to simply find the appropriate room in the morning and stay put all day, rather than trying to bounce from one session to another, and risk missing the start of a talk in another room. Tuesday morning there was a single track of talks, followed by the poster session. Since my contribution for the conference was a poster, I took the time during lunch to read the other posters, so that I’d be available during the session to speak with people reading mine. I met a variety of interesting people during that afternoon session, but only had a short chat with each of them. After the conference there was a post-conference field trip (post with photos to follow). I did meet a few of my fellow field trip travelers, but the bus ride was mostly quiet or people speaking with their seat-mates, and, as it turned out, I didn’t have a seat mate.

The second conference, the Textile Forum, was quite a contrast in organizational style. This conference was set up as a setting to an experiment. The experiment was designed to quantify the changes that result in the quantity and quality of yarn spun with drop spindles with different masses and moments of inertia. Therefore the experimental part of the conference involved two one-hour sessions of spinning a day for five days in a row—each session using a different spindle whorl. As a result this conference worked on a very different schedule than the geology one. There were roughly 20 of us in attendance, from a variety of different countries. 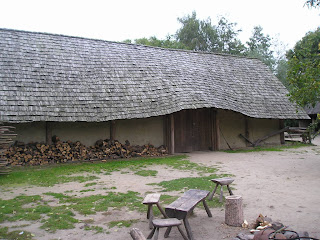 Most of us stayed on site in the Iron-Age style “hut”, which is equipped with straw mattresses and sheepskins to supplement such bedding as we brought with us. Therefore our day would start with a communal breakfast, followed by a session wherein the spinners did their two one-hour sessions (with a break in between) and the rest of us worked on other hand-crafts and everyone chatted about any number of topics of interest before lunch, then after lunch we’d scatter to the four winds (many of them to see museums), and reconvene in the evenings for the talks, followed by social time spent around a campfire before sleeping.

The combination of the very different time-schedule for the conference, with the much smaller number of attendees resulted in the opportunity to get to know my fellow Medieval Textile enthusiasts much better than I did any of the geologists at the first conference. I will be happy to recognize the geologists at all next time I see them, but I now call many of the textile people friends. In short, while I found both conferences very enjoyable, with many interesting things learned, I think that I liked the format of the textile conference much better. Alas, off of the top of my head I can’t really think of a way to do a parallel sort of thing in the geosciences. What task do geologists do that would permit them to gather in a small group around a table, doing said task while conversing with one another? And what would it take to get them to do it? The spinners did their spinning (with some very oddly shaped/sized/weighted spindles “in the name of science” to see if there is a difference in how spindles behave which isn’t directly related to the spinner. But when geologists do experiments it usually involves setting something up and then going away for a period of time. This practice wouldn’t be conducive to a similar environment as was achieved in the Textile forum.

Field trips (and GSA's Field Forums) might be the closest thing to your textile conference experience for geologists. Field trips are very social (in a way that conference presentations are not), and observations made in the field are an important part of the science. So, maybe?

Indeed, I find field trips more social than other aspects of conferences. However, many aspects influence how social the field trip turns out to be. The two most important are duration of the trip, and weather.
The field trip I did before the Deformation in the Desert conference in Alice Springs in 2007 was a very social trip--it involved camping in the Australian Outback for several days, with bus journeys each day to new locations , giving ample time to get to know one's fellow travellers, both in the field, on the bus, and in camp. The pleasant weather contributed to social interactions in all three types of location.
In contrast with this was the trip to Barrow's zones in Scotland the week before last. It was just the one day, and the day was cold, wet, and rainy. While there was more socializing than at the conference itself, the shorter duration combined with the very human tendency to retreat into oneself when cold and wet made it a less social field trip than the 2007 one I attended.