It has been nearly two weeks since I attended the Pre-Conference Field Trip, yet the memory of the day remains strong. I have already written about Stop One; today’s post continues our adventures as we follow in the footsteps of James Hutton, visiting the unmistakable unconformity at Siccar Point.

This outcrop is said to be one of the most significant in the history of the study of geology. Before Hutton published his theory on geologic time many people accepted Bishop Ussher’s calculations that the earth was only 6,000 years old. However, Hutton’s observations of geologic phenomena led him to realize that it must be far, far older than that to account for the sedimentary record. He observed erosion taking place in the world around him; saw how much sand a river can carry to an ocean over time, and reasoned that this process must have been going on for as long as there have been rivers. The rate at which the sand is deposited onto beaches or into lakes, or along a riverbed is measurable, and so estimates of the time needed to deposit a given thickness of sand may be calculated. He also noted that when sand is deposited by water, it always happens in horizontal layers. Comparing such layers of fresh sand, mud, and/or gravel with layers of sandstone, mudstone, and conglomerate leads one to the realization that the sedimentary rocks must have, at one time, been made up of loose sediment, before they became compacted and/or cemented into solid stone, and any sedimentary rocks which are folded or tilted must have been tilted or folded at some point after deposition and after becoming rock (or the sand would have slid back down into flat layers again).

The rocks in southern Scotland include two very different packages. The older of these packages is made up of Silurian sediments—poorly sorted sandstones (greywackes) which have been folded intensely enough that the bedding now stands on end in many locations rather than horizontally. The younger package is the “Old Red Sandstone”, which was deposited during the Devonian. Hutton knew from his explorations in the region around Edinburgh that the red sandstones are reasonably flat-lying and outcrop to the north of the steeply tilted Silurian greywackes. He knew that there must be some place where the two rock types are in contact with one another, so he and some friends set out in a boat along the coast in search of it.

Instead they discovered evidence that the older rocks must have been deposited as typical flat-lying sands and muds of great thickness, transformed into rocks and folded so tightly that the layers now stand on end, the edges of the folds and some unknown amount of rock eroded away, and then, some time thereafter, the sands which were to become the “Old Red Sandstone” deposited atop them, before themselves becoming rock and then being subjected to erosion. Hutton argued that if sedimentary rates in the past operated on the same sort of time scales as they do today there is no way that all of that could possibly happen in so short a time as only 6,000 years. One of his companion on that trip, John Playfair, is recorded as having said that “The mind seemed to grow giddy by looking so far into the abyss of time” when they contemplated just how much time the entire process would have taken.

Indeed, what they couldn’t know as they stood upon this rocky shore contemplating "deep time" was just how much time is represented by just the period of erosion between the two rock units, which has subsequently been calculated at fully 55 million years, during which an ocean basin closed and a mountain range grew.

Unlike Hutton's first boat-trip to this location, our field trip approached the point by bus, traveling south from Edinburgh, and finally stopping in a field near the coast some 55 km to the east of Edinburgh. Travellers are greeted at the stop with a first information sign at the trail head, 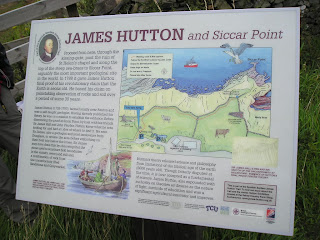 and a second when one reaches the point at which one descends to the seaside. 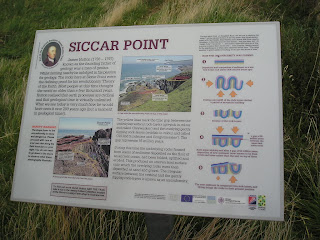 The way was steep, but, fortunately, it wasn’t a rainy day, so the grass was dry, and we made our decent safely. 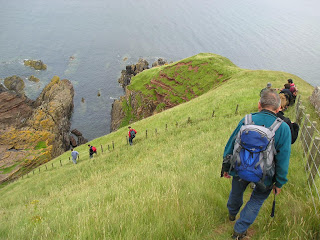 We then spent a pleasant time examining the rocks, and taking photographs before climbing back up the hill to return to civilization, content in our own observations that yes, indeed, this outcrop does record simply amazing amounts of time. 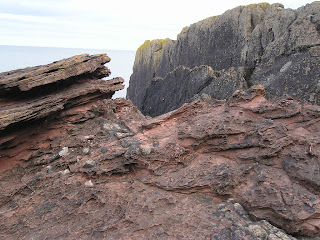 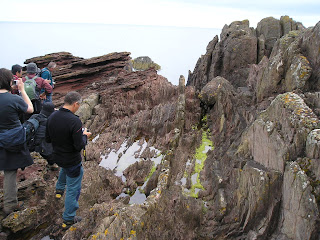