One of the highlights of spending a week in Verbania for the Short Course is the short walks I’ve done during our breaks between lectures. So far my favorite attraction is the Chiesa di San Remigio, a beautiful 11th Century church on the ridge above the school/hotel where the course is taking place. As one wanders up the hill towards the church one reaches a place where the stone wall along the side of the road changes from a blocky, quarried, igneous rock sitting upon the road bed to a place where the wall rests upon outcrop of some nicely folded schist, and the wall is comprised of primarily very local stone—both round river rocks, and platy bits of the local schist. 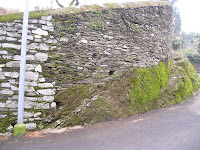 On my first walk up the hill the outcrop got my attention, and my feet led me ever up, wondering what would be next.

I was truly delighted when I reached the top of the road and discovered the little stone church. 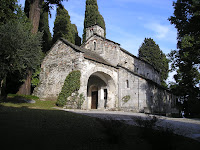 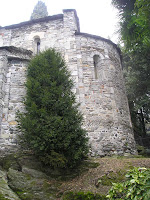 Like the stone fence above, is also built directly in contact with the folds of the schist. 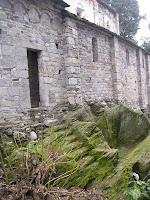 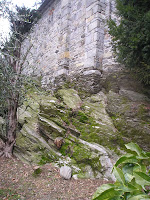 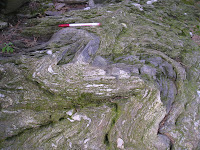 Since discovering this delightful location on Monday, I have made a point of returning each day, and each time I discover new interesting rocks amongst the building stone. Today a small group of us went up, and we crawled all over the foundations looking at the rocks (as you do in such locations).

One particularly cute rock is so garnet-rich it is nearly pink. However, while I have searched carefully, I have yet to find any others of that sort, so suspect that the river and/or glacier (the lake is clearly a filled glacier valley) which carried it here brought it from quite a long way away. 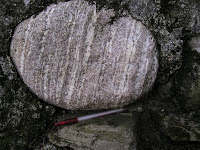 The only other rock with visible garnets in it that I saw was this one with the lovely stretched quartz. 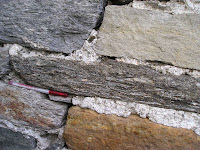 However, I did find a good-sized garnet in the mortar 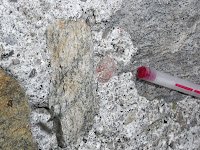 I like the way the different stones were used as embellishment. 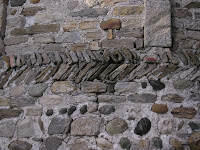 As were some spare bricks they had lying around. 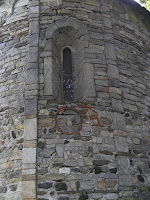 I have often said that I’d like to live in a castle, but would settle for an old stone church. However, until this trip, I’d never actually met an old stone church in a location in which I’d want to live. This place, despite the density of houses in the village, is one in which I would be happy to live. The view from the church is just as amazing as the rocks of which and upon which it was built. 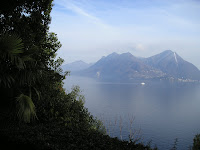 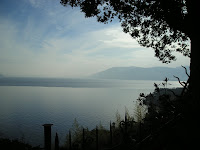