What is the difference between contact and regional metamorphism?

In the comments on a recent post I was asked about the difference between contact and regional metamorphism, and thought that the answer deserved to be a post of its very own.
First of all I should remind you that “metamorphism” is about change—specifically the changes that take place in a rock due to changes in temperature and pressure. Each mineral has a range of temperatures and pressures at which it is “stable”. When in that range it exists happily because the pattern of the atoms within its crystal structure is appropriate for the conditions. If there is a large enough change in the temperature and/or pressure the minerals become unstable. If that change takes place slowly enough and the new conditions are held for long enough the unstable minerals will undergo chemical reactions to grow new minerals out of the component elements of the old minerals.
However, if the change is too fast the “unstable” minerals will continue to just sit in their rock, doing nothing. This latter feature is a good thing—without it we would never see high-pressure rocks at the surface. Diamonds are a high-pressure form of carbon, and graphite is a low pressure from of carbon. Their ingredients (only the element C) are the same, but their crystal structure is very different. The carbon atoms in the high-pressure version are packed much closer together than the low pressure version. If the diamonds didn’t come to the surface so quickly they would have been replaced with graphite (or the carbon would have been used to create some other mineral).
So today’s post is about those rocks that experienced new conditions in temperature and/or pressure long enough that chemical reactions happened and new minerals grew in response to the new conditions. There are a couple of ways this can happen: Contact Metamorphism and Regional Metamorphism.
Contact Metamorphism is what happens when something really hot (like a body of magma (molten rock) comes in contact with colder rock. The rocks get cooked, just like when one pours pancake batter onto a hot frying pan. Anyone who has ever made pancakes knows that over the course of the cooking process there is a range of textures to the batter before one flips it to cook the second side. The part against the pan got the hottest. As a result the liquid in that layer is completely cooked away and the solid turns a golden brown (or even darkens to black if left unattended too long), the next layer out from there also becomes firm, but with a different texture than the crust, and the far side of the pancake, which is exposed to the air, is still cool enough in temperature that it hasn’t solidified at all yet.
This is similar to what happens to (relatively) cold rocks that have been intruded by molten rock. The layer of rock closest to the intrusion heats up the most, and any fluids escaping from the rock as a result of the heat participates in the chemical reactions of the “cooking” process, so a suite of minerals grow in the layer closest to the heat source that are indicative of high temperature. The next layer out doesn’t get quite as hot, so a slightly different suite of minerals grows there, and even further away from the intrusion the temperature is lower still, so lower temperature minerals grow.
These sorts of patterns were very helpful in formulating theories of metamorphism in the early days of the development of our science, as geologists could easily find places where the pattern can be traced from completely unaltered “country rock” through a series of gradually more and more metamorphosed rocks right up to the contact with the intrusion. In places where there is good outcrop one can see that the layers form concentrically around the intrusion.
Regional metamorphism, on the other hand tends to involve much larger packages of rocks. It is often associated with mountain building (orogenesis), and happens when an entire region gets buried deep enough so that both pressure and temperature increase. This increase causes new minerals to grow. Regional metamorphism is, often, something that happens over a much larger body of rock than contact metamorphism (which goes a long way to explain why “regional” was chosen as the name). It also, often, takes place at higher pressure than contact metamorphism, since it takes a certain amount of depth to achieve the sorts of temperatures at which the metamorphic reactions take place, and that depth comes with corresponding pressure increase as well as temperature increase. Regional metamorphism takes place at a variety of temperatures and pressures, which have been divided into “facies”. The below diagram is figure 2-2 in Spear’s 1993 book Metamorphic Phase Equilibria and Pressure-Temperature Time Paths. It shows some of the more common “facies” of metamorphic rock. Each facies is defined by a group of minerals that coexist in stable equilibrium in that range for a specific rock type. Therefore we metamorphic petrologists can tell just by looking at which minerals co-exist in a single rock roughly what sort of pressure and temperature the rock was at when the metamorphic minerals grew. 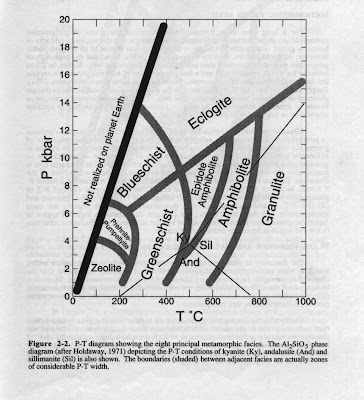 Thanks for the answer to my question! Great explanation - I looked on the internet but, as it always is, it was excessively complicated so it's great to have a clear answer :)

Definitely deserves adding you to the blog list on my blog (maybe vice-versa too?) - keep up the good work!

Oh--thanks for mentioning the list--I forgot it was even there. I added a couple when I first set up the blog and then never noticed it again, since I read blogs through GoogleReader. But sometime since I set it up they've added a button letting one import things from google reader, so I did.

Yours is lovely by the way--great photos of the aurora!